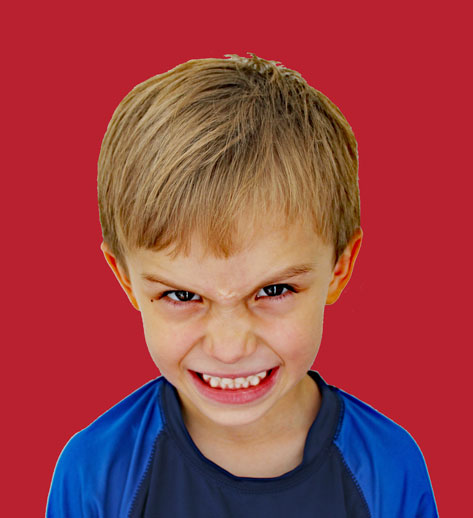 This is the face.  It speaks volumes.  It means “I’m frustrated”, “You’re not listening”, “I’m not getting what I want, so you shouldn’t get what you want either.”

Harry is my middle child.  He’s helped me think outside the box more because he’s an interesting mixture of several oxymorons.  But one thing that consistently works every time with him, is when he’s frustrated it’s time to talk to his feelings, not his logic.

It’s comical, and sometimes painful, to watch my husband work with Harry when he’s reached “this face”.  For some reason Daddy sticks to using logic with Harry, even after we’ve hit a high level of frustration.  The more logic that gets piled onto the situation, the more firm and immovable Harry becomes.  It’s as if each logical argument is a personal attack on how he’s feeling.  And that makes him go from frustrated to deeply hurt.

As a full-time mom I’ve been able to experiment a little when dealing with situations that are really emotional.  Most of the time everything stays fairly normal.  But, you know, inevitably we hit our limits and we reach this point.  I’ve learned there are two important things that I have to do if I want to guarantee success.

If I do these two things, both Harry and I end up happy and satisfied with the result.

Studies have shown that political decisions (and discussions) are based primarily on emotion. So we should all be able to relate to Harry at some point, maybe just about different things.

When an issue gets too emotional, and we’re giving each other the angry face (figuratively or literally), what can we do about it?  Is there a way to navigate through the emotions and reach a solution that is both logical and emotionally satisfying?  I argue that there is a way.

Springboarding off how I approach my son’s emotions, I wonder if we could apply the two general things I do with him to help us get through political discussions.

Be a good listener and validate emotions.  As strange as it sounds, when emotions are high, you want to encourage more talking, not less.  The quality of the discussion does matter, but don’t let the initial bumps of conversation deter you.  The more we talk through what we’re feeling and thinking, the more chance we have of relating to each other and even getting past the negative emotions. Validation can help with that.

When someone tries to tell you your feelings are unreasonable or illogical, what does your brain naturally do?  It works to justify the emotions.  OR, you just get more emotional.  But true validation is a little tricky.  It can’t be lip service either.  Fake validation makes it worse and can leave a person feeling belittled and more hurt.  You have to reach inside and recognize that we’re all human, experiencing human things, and there’s a lot we have in common.  Talk more, keep the conversation going, relate and validate where you honestly can.  Put in the time and don’t give up.  This works even better if everyone is equally investing.

Be flexible and willing to adjust your position.  This is probably the hardest part.  I’ll let you fill in the blanks as to why we hold on to our position so fiercely.  Instead, I’ll focus on the amazing things that can happen when we become more flexible.  As we talk through things and we’re actively listening, obviously we’re bound to learn a thing or two about someone else’s perspective.  As we learn, we may come across a few things that naturally adjust the reasons behind our own position.  There’s a lot to gain from being willing to change and adjust.

If our position is indeed the best one, all logic and emotion should point to supporting it.  We then come away feeling more confident in our decision.  If, on the other hand, our position isn’t as strong as it could be, we should be willing to make adjustments to put it more in line with new information.  We then come away with a better, stronger position about an issue.  In both scenarios, we end up with the best possible solution with the information we have.  And it’s okay to share ownership of that new and awesome solution.

I feel like there is hope.  True, a lot of us shy away from political discussions when emotions are high.  But I don’t want to ignore these issues, and I don’t want to simply surround myself with like-minded people who tell me what I want to hear.

As a parent I’m learning that bending my children to my will is not very rewarding. Ignoring their emotions and belittling them is even worse.  Lately, I find myself noticing and admiring the discipline of my children as they let go of what they want in order to do what’s right.  I hope to be more like them.