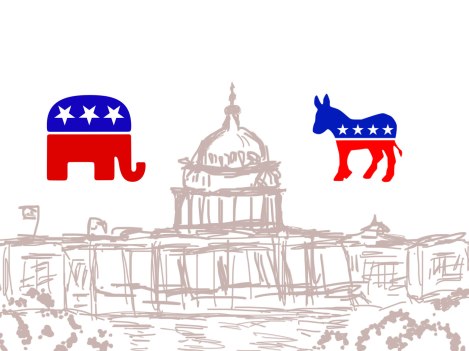 Why do we have a two party system?  Yeah, there are other political parties out there, but, not any other REAL ones.  Not any that win big elections.  What’s up with that? We’re American.  We love choices.  Just walk down our breakfast food aisle.  So when it comes to politics, why do we really only have two to choose from?

We started out with more options and variety, ones you could reasonably vote on.  To find the answer to our two party system I don’t want to go too deep into our nation’s political party history.  Politics are boring enough.  I think the short answer to why we’ve ended up with the Republicans and Democrats comes down to compromise.

Breaking up into small little parties didn’t give any party a clear advantage.  Early on I think it became pretty clear that by compromising and working together, power in numbers could bring about more wins.  And so we all started converging around the two sides of most issues — the conservative side and the liberal or progressive side.  Neither side is bad.  In fact, I’ve come to appreciate both ways of seeing things.  They balance each other, preserving our national core while moving us forward.

To keep those odds, though, each party had to continue to make compromises in order to keep people working together.  Our country is rich and diverse, never really neatly fitting into two boxes.  Each party, to keep people feeling comfortable in their respective parties, has had to moderate the extremes.  Because of the mixture of opinions the more extreme ideas have always present, but we’ve generally enjoyed moderate candidates.

Up until 1992 we still held on to the idea of more options.  When Ross Perot entered the scene, as another person who appealed to conservative voters, people speculate that he took votes away from the incumbent president George W. Bush.  The argument is that Ross Perot made it so the Democratic candidate, Bill Clinton, won.

We don’t like it when our candidates lose.  It’s in the best interest of both Republicans and Democrats to maintain the 50% chance of winning.  You add in a third or fourth viable candidate and those chances of winning goes down significantly.  So, more rules and laws were set up to make it harder for more candidates to compete for anything important.

I think rules don’t matter if the people decide to work together and choose otherwise.  We are still, after all, a representative democracy.  To keep us choosing between the Republicans and Democrats our political culture has pitched in to help.  Through our culture we’ve come to think that the two party system isn’t just the best way, but the only way.

Have you ever been told that a vote for a third party is a vote for the “other” party?  This was especially apparent in the last election when many people decided to vote for the lesser of two evils mainly to prevent the worse evil from winning.

Looking back, we could probably agree that our two party system hasn’t been all that bad.  We enjoy a functioning government, a stable and thriving country.  We make it through the hard times and move on.

But, as I look at what’s been going on recently, the tactics are clearly changing.  Extreme ideas gain more momentum, more attention, more buzz…. more votes.  I was talking with a gentleman last weekend and he said the only way the Democrats can win again is by producing their own version of President Trump. A Democratic version of Donald Trump? Not the most exciting thought…

The two parties are moving towards the extremes because of the moderates.

While moderates are likely the majority of voters, they are becoming less and less important.  Now that our nation already has two solid political parties, there isn’t a need for compromise and moderation within the party anymore.  Why should the Republican or Democratic party worry about the moderate?  There are only two choices anyway.

Each party has come to realize that only by being more extreme, more divisive, can they build enough momentum and power within their faithful membership to win.  If some people are unhappy and decide not to vote, it doesn’t hurt the party.  What matters is that candidates appeal to enough of the passionate voters to get THEM to show up and vote.

All that noise and build up around the growing extremes makes it hard to believe there’s anything anyone can do to bring things back to where they were, or even simply closer to the center.

And anyway, moderates don’t do much.  So, there’s nothing to worry about.